Hail To Purple, Hail To White

My ten-year college reunion weekend begins today. And, as is probably apparent by now, I’m not there.

When I first started getting notices about the reunion, I immediately tossed them aside, thinking “I won’t know anyone, no one will know me, it’s too far to travel for an awkward evening out.” But as the date has approached, I’ve found myself surprisingly nostalgic about Northwestern and wishing, just a little, that I could go back to pay a visit. 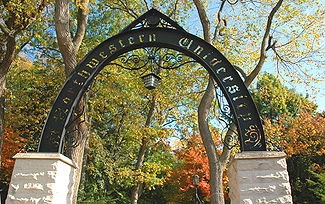 I wouldn’t call my college years “typical.” I was a teenage convert to Mormonism, so my religious practice created a wall between me and the normal university experience, be it Big Ten or Top Ten (of which NU was, ahem, both). Although living in a dorm where other residents were observing Ramadan and Passover, it didn’t feel quite as oppressive or bizarre as one might assume. I missed out on some things I think I would have enjoyed, but I also had a good excuse to avoid things that would’ve just annoyed me, too. Regrets, I have a few … but I don’t have a criminal record, so I guess it’s a wash. In all, I really enjoyed the educational experience, I have fond memories of my work experience, and I’ve just accepted the fact that four years is too short a time for me to forge a lasting social experience.

I’ve always thought about reunions being a chance to reconnect with people, which is mostly why I wasn’t originally very interested in attending mine. I’m sure I had a lot of great classmates, but I didn’t take the opportunity to know very many of them. The few names that do spring to mind when I think about my years at Northwestern are mostly people that I worked with or went to church with, and most of them weren’t in my actual graduating class anyway. And the ones that were - well, that's what Facebook is for, right?

But as I’ve been bombarded by e-mails and glossy brochures about the reunion, I’ve also realized that there’s a reason that reunions and homecoming are always linked. That school was my home for four years, a home I entered, essentially alone, at 17-years-old. I was lucky to have my sister on the other side of campus my first year, but she was the only family within 400 miles. Other than the seven members of my high school class who also ventured to Evanston, the remaining 7000 or so faces were unfamiliar.

Within months, however, the campus and town were as known to me as anywhere I’d ever lived. Living on foot brought every detail closer, and I knew the streets and shortcuts better than the city I’d just left with a year-old driver’s license. It’s a beautiful campus and was, at the time, a quiet, charming, lakeshore town (an inexplicable hunger for condos and chain stores has apparently hit the town planners in recent years). Even in the times that I didn’t feel completely at ease with my place in the student body, I felt comfortable in my surroundings.

During every change of season, I think about how it felt to walk to class – in the crisp, riotously-colored fall with the smell of drying leaves thick as smoke; in the frigid, lake-blown winter when trying to move faster only increased the burn in your ears and the likelihood of falling on the ever-icy sidewalk between south campus and Tech; in the soft, spongy spring with crocuses trying desperately to push through the slushy mud.

I wouldn’t say the 21-year-old who fought to stay awake during Ruth Bader Ginsburg’s commencement address was a fully formed adult, but I did grow up at Northwestern. I learned how to navigate public transportation, order Mongolian barbecue, and manage a staff of highly unpredictable music majors. I worked very, very hard and earned a degree that has opened doors to me ever since. As a writer, having Northwestern on my resume has attracted attention I wouldn’t have otherwise received. I didn’t have the rowdy, reckless, best-years-of-my-life kind of college experience people usually celebrate at their reunions, but it was a good time, a meaningful time, and a time I will never forget.
Posted by Memphisotan at 1:20 PM

Go Wildcats! You are aware that they are now 6-1, right?

I love that you included a photo of Clarke's ...

My first apartment was in that courtyard attached to Clarke's - the rodents had a direct line between their kitchen and our garbage.