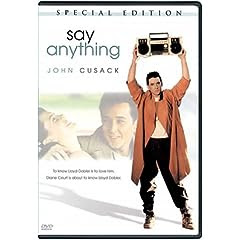 But in all this musical contemplation, I began another, more focused list project that will take some time to complete. No more details on that right now, but look for it on, say, June 7th.
Posted by Memphisotan at 2:08 PM 2 comments:

High School She Was That Girl

So in a random fit of Googling, I decided to look up the girls I remembered from high school with some degree of intimidation - because they were cooler or richer or artsier or existentialistier or grown-upper than I was at 15. The dark-eyeliners and the danceliners. The people I was too barricaded in my preppy, churchy, college-bound world to get to know, and the people I simply didn't care to. And the exercise was fascinating - sometimes surprising, sometimes totally validating. I discovered that the mysterious, insular girl who took the edgy photos of the artsy kids for the senior yearbook is now doing marketing and design for big corporate clients. I saw that the smart, sporty girl I always felt meek and mousy around had become a 10k-running attorney. And I learned that the girl I considered, rightfully or not, to have the worst "reputation" in our high school (no link, sorry) is getting her PhD in one of the most respected English Literature programs in the country.

Whether these girls turned out the way I expected them to or not, it was an eye-opening exercise, because whoever they became, they looked a lot like the women I know and value in my life today. It made me wish I could go back in time and get their future email addresses, just so I could write them now and say, "Hey, glad to see you're doing well." Because I am. Whether they were girls I envied or feared, I'm happy to see that my adolescent intimidation foretold the qualities that are contributing to their successes today.

Okay, maybe except for the Trojets.
Posted by Memphisotan at 11:21 AM 3 comments:

So I was driving home from work last night thinking, "Where have all the Huey Lewises gone?"

By which I meant, where are the silly pop bands that everyone listens to and secretly enjoys? Where are the grown men willing to wear bright clothing and mug in front of a band doing choreographed dance moves? Why does every single group on the radio (or satellite, whatever), especially those that are male-dominated, take themselves so damn seriously? The closest we seem to get are angsty young men singing about obnoxiously quirky girls with twee, antiquated names, and I've had about enough of all that.

And then I turned on The Today Show this morning and there they were, five adult men in fedoras, open vests and loose ties, footwork flawlessly synched up despite the New York springtime rain pouring down around them. And just as I was heralding this decade's ability to produce the new News, I realized that this blast of bubblegum was actually blowing in from the 90s. Upon closer inspection, I discerned that those five thirty-something guys were very familiar. As familiar, in fact, as my adolescent bedroom wall. 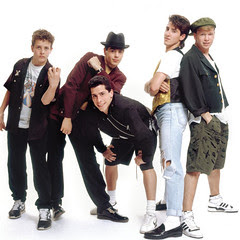 Yes, it was New Kids On The Block. And yes, my (probably former) friends, even though there was no one around to witness it, I'm going to confess that I actually felt a little flush when I recognized each slightly more filled-in face. Because I was, once upon a time, one of Those Girls. Well, maybe not one of Those Girls - I didn't own a pin-covered porkpie or cover my Keds with I <3 NKOTB or anything - but I did enthusiastically attend more than two concerts and I'm pretty sure I remember using my Donnie Wahlberg t-shirt as a pillowcase. I forced my parents to sit through repeated playings of every cassette whenever we were in the car (including the Christmas album I won by calling into KDWB and listing the Top Nine at Nine in under nine seconds), and I even vaguely recall making arguments as to their artistic merit (although that may have been the songwriting genius of Jack Wagner's third album I was defending, come to think of it).

I can recognize it now, the obvious marketing ploy laser-sighted at my demographic. I can plainly see how their sexy-but-safe personas were directed straight at the girls of my age, the pre-daters who believed that teenage love might be romantic, still oblivious to the realities of curfews, groundings and minimum wage. I think these are now called "tweens," but back then, we were just hyper little girls. 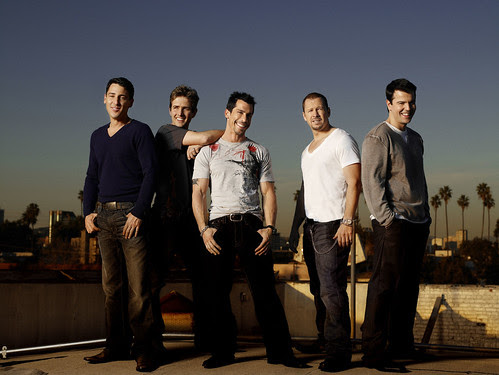 Older and debateably wiser, I can see the strings behind this latest incarnation's pop puppetry. I know when I'm being pandered. The record execs know that those little girls have grown up and had little girls of their own, and now they're trying to suck us all in at once. In the crowd outside Rockefeller Plaza, there were two generations - Those Girls and Those Women - mouthing every lyric and holding up neon-posterboard signs. But I'm pretty confident that I'm still not one of Them, because instead of the flush of excitement I felt as a pre-teen, the flush I felt today was one of maternal concern. I wanted them to hit their notes, I wanted them not to fall on the slick stage, I wanted Jon to pinken up and not look so much like he was going to hurl due to his crippling stage-fright (which he described on Oprah a couple years back).

And I sort of, just a little, wanted to hop on iTunes and buy the new single. Because although it wasn't the most poignant or well crafted song I've ever heard, it was upbeat and fun and didn't once mention a girl named after a Biblical character or British monarch.
Posted by Memphisotan at 9:03 AM 6 comments:

The Walls Have Ears

Writing this one-handed and half-brained, as I'm balancing a baby on my lap who hasn't slept more than twenty minutes at a stretch in three days. I was blaming a particularly fierce bout of tooth-erupting, but after waking up with a 102-degree fever, fussing inconsolably and then throwing up all over me, I started to think something else might be up. Or maybe it didn't occur to me until the third time he threw up all over me. Regardless. I eventually pieced together that Mr. Baby was not his usual happy self.

Fortunately I was already up at 6:55, which is when our doctor's office starts taking appointments for the day. Although somehow, when I called at 7:02, she was already booked up for the day. So I made a 10:15 appointment with a doctor I'd never met and tried to get Miss M ready for school with a screaming baby on my hip. (I may start pinching Mr. Baby in the mornings, because the girl is much more agreeable when her brother is in distress.)

By the time we arrived at the office, the Tylenol and sweet potato puffs had kicked in and Mr. Baby was happily scaling the coffee table and playing peek-a-boo with the coat rack. I almost packed up and took his cheeky little grin home. But when he screamed himself purple while getting laid flat to be weighed and measured, I was pretty convinced that his ears were hurting him.

And sure enough, when our mysteriously accented new doctor came in and inspected his ears, she quickly pronounced that there was an infection on his left side. If he'd been my first baby, I might have asked more questions and pushed her as to whether it was likely viral or bacterial, but after three days and nights of no sleep and a constant soundtrack of "mmmeeeeewwwwwwmmmmmeeeemmmmmmamamamamamamaaaaa," I just took the amoxicillin prescription and thanked the nice (Italian? Brazilian?) doctor for her time.

So now Mr. Baby is about to start his first round of the pink stuff, a milestone that Miss M managed to hold off until well after her third birthday. I'm trying not to take it as a statement on my mothering and just accept the fact that Mr. Baby lives in a wider, more social and, yes, germier world than his sister did as an infant.

We were sitting at the kitchen table enjoying a pre-bedtime snack of hard-boiled eggs when Miss M looked up from her salt pit to ask me a question.

Now, for some reason, I just instinctively knew that wasn't the phrase she meant to ask me. But instead of going the easy route, I sought clarification.

"Yeah, break up! What does break up mean?"

I tried too late to save myself by using a time-honored parental tactic.

"Where did you hear that, honey?"

"L, at school. He said he was going to break up with me."

No. No no no. We are ten years too early for this conversation. Another diversionary tactic.

Hm. That didn't buy me much time. There's only one way to handle this now.

"I don't know what that means, honey."

She went back to eating her egg for a minute, then burst out in frustration.

"You don't know anything! You don't even know what a word means!"

And I didn't argue. Because I can read her a book and she'll think I'm brilliant again, but for a girl who wears her feelings on the outside of her body, it would take much longer to recover from a peer's insult. At four and a half years old, I'd rather her think I'm an idiot than feel rejected by a boy.

Journey To The Heaviside Layer

In memory of Decibel the cat, a feisty but loving companion.

Posted by Memphisotan at 2:58 PM No comments:

She Blinded Me With Science

I know all six of you don't need me to link these every time, but just to make things easier for my mom, here's my latest CA piece.
Posted by Memphisotan at 8:08 AM 1 comment: