Okay, I think I've got a little time to mention this before I'm summoned to tucking-in duty, so here we go.

I counted back and it's been right around forty weeks since I originally mentioned my need/desire to sell Mothersville. I wasn't really eager to let the store go, but I just couldn't figure out a way to stick with it, especially with another child on the way. Several possible options came and went since then, but as of just a few weeks ago, I really didn't know what was going to happen when the lease expired at the end of August. But looking back, it seems quite fitting that it took this long for a solution to my retail dilemma to present itself. 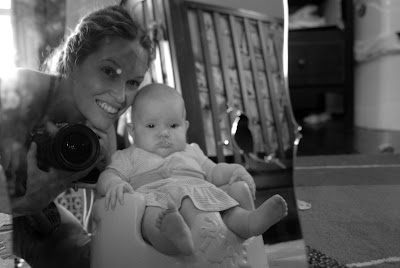 Which brings us to right about now, when I am so pleased and excited to announce that the super-lovely and uber-talented Melissa Anderson Sweazy has bravely stepped to the helm as the newest co-owner of Mothersville. A Memphis native graciously returned to us by the City of Angels, Melissa brings a Southerner's wit and charm curled up around a left coast artistic sensibility, and best of all, a deep and true desire to help out the new mamas of Memphis. She, babydoll Harlow, and the clearly game Caleb are fairly new to the Memphis parenting scene, but are eagerly throwing themselves at the mercy of Midtown. Give a hand, y'all!

I admit, I was a little hesitant to get back into a partnered situation, not sure if I could give up the thrills of dictatorship. But it quickly became clear that we shared a passion for Mothersville, as well as sharing several other passions (e.g. Prince, Mini Coopers, Xanadu). And it's taken a little time, but I think I can even overlook her grotesque flaws (i.e. publishing a book, having a super-sleeper baby, sharing the same general oxygen as George Clooney). I mean, hey, nobody's perfect, right? What really matters is that we both believe in Mothersville, both want to keep providing support to Memphis moms, both have faith that the tide of natural parenting will eventually flow to the midsouth. And of course, both appreciate the wonder that is Olivia Newton-John disco-roller-skating with Gene Kelly.
Posted by Memphisotan at 6:02 PM

I'm so happy for you both! And eager to schedule a Xanadu-watching party.

So you're in agreement there's just enough space in the back for a disco ball and a parqueted floor? Thanks for such an illustrious intro!

Yay! Someone new to help me with all my maternity shopping!