I’m sure that most people fall into their interests and hobbies naturally. They live their lives and are drawn toward the activities they enjoy more than others. But what happens when your life is primarily occupied by work and children? It was with this slightly pathetic realization that I went on an active search for a pastime, a search that became especially focused after I decided that I was on a break from all non-blog writing.

I rejected almost every idea that came to me, for one reason or another – too messy, too expensive, too structured, too far away, too dependent on having the merest semblance of a design aesthetic– before I remembered that I’ve always wanted to take a jewelry-making class. My initial hunt for local classes was unsuccessful, though, so I started doing research to see how much I might be able to pick up on my own. Looking through online instructions, I was only slightly overwhelmed, which is the best I can hope for when facing a totally new concept. After three hours in various stores, staring down pliers and beads and findings with a very patient three-year-old, I decided to buy a very basic starter kit from Amazon and a couple tools that weren’t included in the set. The total investment was about $35, which I justified as the cost of replacing one of the necklaces I’d lost in our burglary. 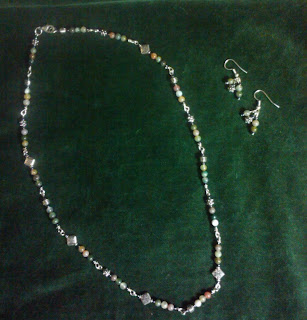 The first night I took out my supplies, I made three pairs of earrings and two bracelets. They were very basic, and quite unintentionally rustic, but there was a marked improvement from one piece to the next. Unlike when I attempted knitting or crochet, which was just one inconsistent mess after the other. Also distinct from my efforts in the fabric arts, jewelry was much easier to understand. There were patterns and instructions for techniques, but for the most part, I could just look at a picture and figure out how to make it. Which was perfect for someone who always got a little nauseous reading instructions like:
Slip st in first ch-1 space; ch 2, * hdc, hdc in same space; [2 hdc in next space] twice; [2 dc, ch 1 for end space, 2 dc] in end space; [2 hdc in next space] 3 times; [hdc, ch 1 for side space, hdc] in next space; repeat from *; slip st in top of ch-2.
It’s also a hobby perfectly suited to my particular defining traits: cheapness, lazy perfectionism, and curiously small monkey fingers. The only thing that concerns me a little is how quickly I picked it up; it feels more like a party trick than an actual skill. But it’s a party trick that ends with new accessories, so, really, who cares?
Posted by Memphisotan at 10:08 PM