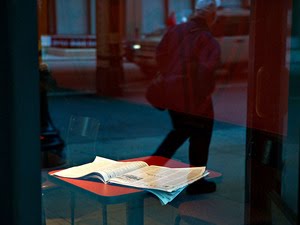 Posted by Memphisotan at 5:14 PM

Lovely! And gutsy. Kudos for embarking, doing, and posting, all three formidable foes in the writerly head.

Loved the surprise at the end, the Chicago cold complete with puffy coat, and the rusty steel wool on the driver's head.

All right, now. I want the novel.