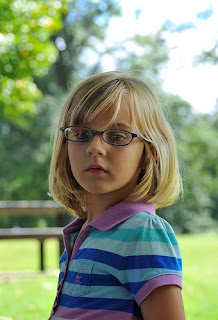 I don’t know what it is about six years old, but it seems so much more grown-up than five. Five is kindergarten, learning the alphabet in the correct order and counting to 100. Six is first grade, spelling tests and math flash cards. It’s the leap from child to kid.

Miss M turns six years old tomorrow, and although it’s expected to say that I’m startled by that fact, it seems just exactly right to me. In many ways, she’s always seemed that age – precocious and overly aware of the world occupied by bigger girls. She grew so naturally into the fully verbal version of herself that it’s sometimes hard for me to grasp that the pre-verbal baby was really the same being. Her first years were hard, it has to be said. She was not an easy, laid-back baby, and I eagerly anticipated the movement through the frustrating periods when all she wanted was to walk and talk and couldn’t get her body to cooperate. I don’t miss her as a baby. I am so happy she is in this place now.

And, for the most part, she is, too. She loves school and the independence it offers her. She is gaining confidence every day, in academic as well as social arenas. When we visited Minnesota over the summer, my mother marveled at the formerly-withdrawn little girl who nonchalantly joined in a game with children she’d never seen before. She’s curious about the world around her and enthusiastic about her place in it. It’s a joy to watch her grow into such a smart, strong kid.

She relishes the things she can do and understand now, and I’m grateful for the freedom it gives us both. But sometimes, out of nowhere, she’ll wrap her arms around my waist and rest her head against my stomach, tears starting to well in her eyes. When I ask her if something’s wrong, she says, “I just love you so much.” In these moments, we both remember that she is still my baby girl.

Happy birthday, Miss M. I love you so much.
Posted by Memphisotan at 7:53 AM

Six really is grown up. But not too grown up to love on mama! Happy birthday, Miss M.