You Are So Lucky On Your First Day

So while we were still grabbing clean clothes out of our vacation suitcases, it was already time to start up the new fall routine. For the second year in a row, Miss M is at a brand new school and Mr. Baby is starting at a brand new daycare, so the anxiety level was at a peak. Well, mine was, anyway. After a summer of worry and occasional tears, Miss M had recently come to terms with the start of first grade and the move to a new school, and even seemed excited about it. Mr. Baby was blissfully unaware of the changes afoot, although he had shown great enthusiasm for the playground at “new sool!”

Still not entirely sure how I was going to get all three of us ready for the day before 7:15, I had planned to drop the baby off first, thinking this would make it easier to navigate the elementary school crowds later, plus provide me with Miss M’s help to haul in the nap mat, bedding, change of clothes and diapers required by the daycare. About five minutes before I’d intended to leave, however, I realized this plan wasn’t feasible, so I called an audible and reversed the drop-off procedure. I wasn’t sure how much time it would take to get M to her room, so I gave us a wide window. 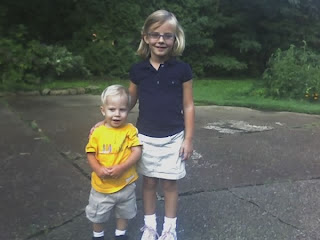 Turns out, dropping off a child who just two weeks ago was weeping about starting first grade was much easier than anticipated. Parking and crossing an un-crossing-guarded street with two little ones was the hardest part of the process. Once we got to M’s room, she was all confidence, or at least bravery. She gave me a kiss goodbye and walked off without complaint. She hugged her teacher hello and entered her classroom with her head held up, although once inside, she seemed a little less sure of what to do. I had to leave before her look of determined fear-conquering broke my heart in half.

Mr. Baby’s drop-off, unfortunately, was heart-breaking in other ways. Once we got to his school, he put on his little backpack and marched all the way into his classroom without a care in the world. It was pretty much the most adorable thing that has ever happened on Earth, except for maybe the sneezing baby panda. But then he realized I was leaving. And oh, did he have cares. His cares were audible all the way out into the parking lot. I know he’s an agreeable child, and I knew he would recover and most likely have a good day, but it was still a very rough start. He didn’t seem so much sad as … betrayed. Like, he knew all about this school thing, but no one told him he had to go without any of his people.

The pick-up report was that he had in fact calmed down quickly and been a model of citizenship throughout the day, but the next morning, he was much warier as we approached the doors. I’ve been through this process several times now, and I know, logically, that it’s going to be better before I know it, but man, that just does not make these first weeks any easier.

On the plus side, Miss M had a great first day and has remained eager and positive about her new school and class. She’s being tested and assessed and will be placed in her permanent classroom at the end of the week, so I’m hoping that she’s just as happy about where she ends up as she is about where she is now.
Posted by Memphisotan at 9:50 PM

He loves putting on his backpack at pickup, too, and insists on putting it back on to walk into the house when we get home. It's very cute.

That may be the cutest photo in the history of cute photos.

leaving my children in school year round has its perks.