Father, Hear Me If You Can

I talked to my dad the other night, which is a fairly infrequent occurrence. Despite weekly calls to or from the homeland, my parental contact is usually with my mom. She's the news anchor, on-call counselor and human resources manager of the family. Much like my sister, Mom knows what's going on with everyone, or knows the secret ways to find out what she doesn't. My mom and sister, they're The Talkers.

But Dad and I, we work differently. There's no need to drag my mom onto Springer for a paternity test, because I'm a blondish clone of the big guy. Not just the melon of a skull he gave me, but what clunks around inside of it, too. If we didn't have these women to draw us out, we'd probably sit quietly for days. In fact, we got a good start on that when we took a 7-hour drive together and passed perhaps 23 words the entire time. It sounds awkward and painfully boring, but it was really quite pleasant. We operate on a similar wavelength and we know that silence doesn't have to be uncomfortable. 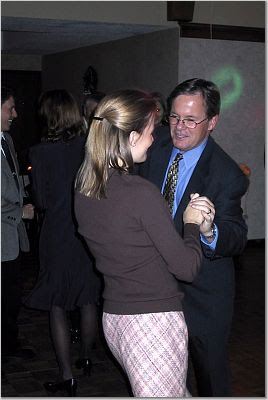 Of course, I was probably uncomfortable during that Christmas tree hunt when I used all the strength in my 18" legs to keep up with Dad's pace in the knee-high (to me, anyway) snow. At some point, I stepped right out of my boots, but I kept trudging along in my socks, not saying a word about it. When my dad realized what happened, he just smiled, picked me up, and followed our tracks back to my abandoned footgear.

That's us. That's who we are. Blame our Nordic heritage or our Midwestern upbringing or our impossibly youthful skin (okay, that's not really relevant, but I feel bad about calling out our melonheads), but we're quiet people. That's why it's been so unsettling to have my fortress of reserve fired upon by a teeny sniper in footie pajamas. I wasn't prepared for the way having an outgoing, highly reactive child would expose my own emotions. When we spend any length of time together (i.e., daily), I feel like my chest has been sandpapered open, leaving every fear, hope, sorrow, joy and insecurity visible to the world. It makes me want to curl up in a ball and cover myself with a chainmail quilt. But I can't. I have to stand up straight, take her hand, and carefully explain, for the fourteenth time, why she doesn't get to pick up the cat by the ears even though she "really, really loves to."

I don't begrudge Miss M her feelings, and I often envy how quickly and easily she can get over her injuries and resentments. Frankly, I'd probably be a much healthier person if I could admit when my feelings are hurt as freely as she does, although I hope I'd do it more tactfully than by yelling, "You're not my best friend anymore!" But I have to admit that part of me is hoping that this next child will bear at least a few of the Norse genes. It would be a nice break to have as effortless a relationship as my father and I have, to understand each other without having to parse every detail. Just the lower noise level would be a pleasant change. It's not an anti-social wish that Baby Dos won't want to talk to me. It's just a quiet hope that s/he may not always have to.

*Footnote/Contradictory anecdote: for the entire run of the series Northern Exposure, my father and I would dance to the theme song. Not some dignified two-step or anything, but this crazy, spazzy, freeform interpretive dance that often left my mother afraid that we were going to knock down the entire home-made entertainment center. As soon as the drums started up and the moose began wandering the streets of Cicely, we were on our feet. Which, considering all that stuff above, is bizarre enough, but ponder for a moment that I was also in my mid-teens. It was our weekly release from the restraints of Norseness and the all-encompassing indifference of adolescence. No one else was invited to dance with us, because no one else could have understood.
Posted by Memphisotan at 7:11 PM

That certainly is one spazzy looking dance the two of you have going on there.

careful what you wish for...baby dos may make you dance in PUBLIC