Everything was beautiful, and nothing hurt

I hate The Ticker. You know, the string of random, unrelated items that appears in a constant stream across the bottom of the screen during morning programs and cable "news" shows. The local NBC affiliate has an especially strange collection of ticker fodder, throwing together 9-word reports on everything from traffic accidents to Britney Spears. So I can't decide if it is a colossal insult or an amazing universal joke that, somewhere between headlines about the Minister-Shooting Wife and the Racially Insensitive Radio Host, I read that, "Author Kurt Vonnegut has died at the age of 84." 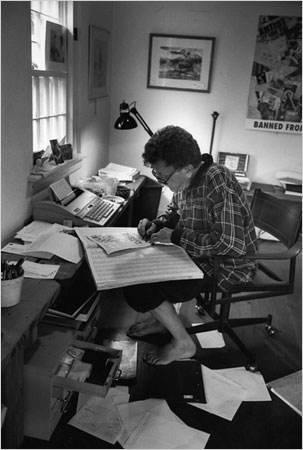 The words hit me straight in the gut, and I made some sort of noise. "Oh," maybe. Or, "shit." Something very literary like that. I went on with my morning, getting the child ready for school and reassembling the house and preparing for work, but with that initial ache still present somewhere deep inside me.

I've never understood the people who lay memorial wreaths on the gates of celebrity homes, making such a public demonstration of mourning for someone they never met. But this morning I felt more sympathy for them, understanding from a personal perspective how the loss of someone unknown but revered could bring out that need to remember and respect the ways a stranger's life can affect your own.

Like so many other avid fans, I discovered Vonnegut as a teenager, the perfect age to come across literature that recognizes the total lunacy of nearly every human institution. But as a burgeoning writer, his work also struck me for its ability to mix satire, parody, and scatological humor yet still make it onto the required reading list. It was the first time I was aware that "serious" literature could also be really, really funny. Other than my beloved Twain, I hadn't come across another writer who got any credit from the society at which he poked such merciless fun. Reading Vonnegut was like learning the secret handshake into The Ironist's Club.

I admit that I haven't read the entire Vonnegut oeuvre, but I hold three of his novels to me like cherished friends: Bluebeard, Breakfast of Champions and Slaughterhouse-Five. Rabo, Kilgore and Billy have lived in my head since my adolescence, speaking clear truths with fingers crossed behind their backs, cracking their deadly serious jokes. They're just as alive today as they were yesterday, and they will live on for lifetimes to come. It breaks a place in my heart to know that the brilliant, hilarious man who created them is gone from our midst, but it's hard to mourn a man whose work has left an indelible mark on this and at least three other planets.

He survived the firebombing of Dresden. He died because he fell down.

So it goes.
Posted by Memphisotan at 9:35 AM